This racket not only performs well, but it looks beautiful too. This neon blue racket is a favorite to Madison Keys, and it’s no surprise that comes full of power and ready to dominate strokes. It’s a classic 100 square inch frame that provides a great sweet spot making it slightly rounder than its other offerings on the market.

As the women’s tour tends to move towards a headlight racket, the Wilson Ultra 100 v3 also moves in this direction. This provides the easy on-the-run winners we love to watch Madison do and do ourselves. 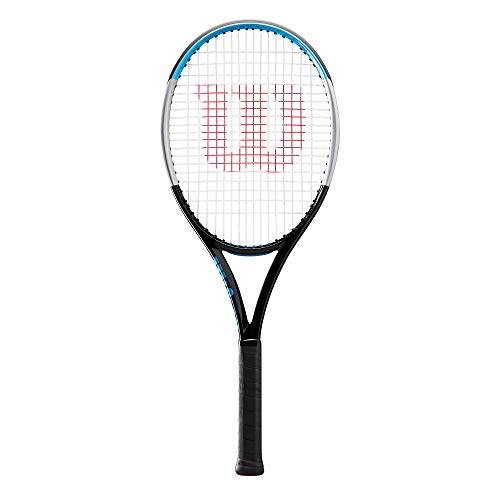 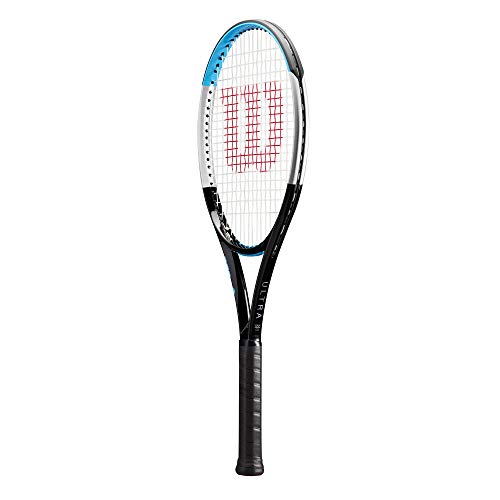 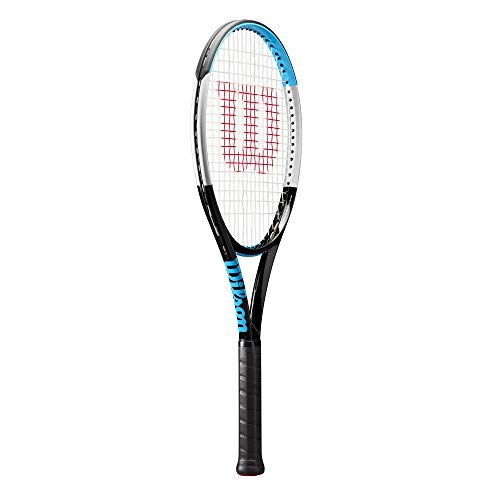 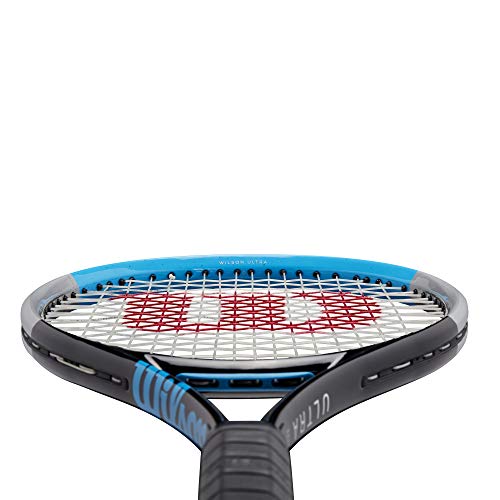 Here are the specs and dimensions of the Wilson Ultra 100 v3.

The Wilson Ultra 100 v3 offers something really different compared to most of the rackets on the market. It has a relatively flexible frame meaning a more dampened hit but also allows for maximum energy output. This is why it is actually considered to be a power racket.

While it is typical to have a headlight racket that is easy to maneuver, this racket is lightweight in general, which may pose some stability questions for players. Its swing weight is even lighter at 312 compared to its 318-gram actual weight.

This racket is said to be most comparable to the Yonex Ezone 100 because it’s a racket that relatively all levels can play with, and everyone usually has fun doing so. This is because it performs well in nearly every category while playing relatively safe on specs.

So let’s get into the nitty-gritty.

The power rib technology infused into the rackets of the stability it needs from being such a lightweight frame and distribution. Because of this tech, the racket is able to perform well in power, control, spin, and more. This is great for the players who know how to transition from aggressive baselining to the run shot selection or, in some cases whipping the racket to pass the player at the net. You can do it all with this racket.

Most players would worry about the feeling on contact, but this racket dampens the vibration and gives you great feedback with each shot. This means that you don’t have to worry a lot about injury and make adjustments to each and every swing to get the ball exactly where you need it to go.

Because this is an all-around great racket scoring well in each category, a player who needs a boost in something won’t find it. This racket allows the player who knows how to change it up, do it themselves. But what it won’t offer is an extra boost in power, control, or even spin. In other words, there is no special trick to the racket.

The Wilson Ultra 100 v3 performs very well at the net. You will be hearing us say that a whole lot throughout this article, so we will try to switch it up. This racket gets into position very easily and is not bullied around at the net by any big shots. Because of the flex in the racket, you can even hit great shots from out of position.

The absorption and feel the racket gives the player allows them to easily access touch volleys, slice, and drop shots with no issue at all. This is great for a player who loves to serve, and volley makes their way in at any time during the points or even doubles players who find themselves at the net all the time.

Despite not having a specialty, the racket still performs great on serve. If you are able to swing through your serve and time the snap right, you can maximize the power that comes from the bounce-back of the flex.

The ability to hit flat, kick, and slice comes naturally for anyone who knows how to do so. For those who need the extra boost as they may on groundstrokes, they won’t find it. However, the ease of swing through on the service and the ability to get the racket in the right position at the right time is enough for anyone who is a beginner or advanced player.

Playability is the first word that comes to mind when it comes to describing the Wilson Ultra 100 v3. The ability to naturally access any sort of aspect you want in the racket makes it overall well-rounded and great for all-court players. If you want to work on spin, no issues. If you want to hit with power, no problem. Controlling it will never be a tough task either. This makes it great from all areas of the court and can be awesome for a developing player at all levels.

Serve and volleys hold up well, just like the groundstrokes. This is because the east to maneuver stable racket offers power rib technology and flex that some of the other rackets on the market simply don’t have. This creates an enhanced feel for a player to make any necessary kind of adjustments shot after shot.